Are You New to Matcha 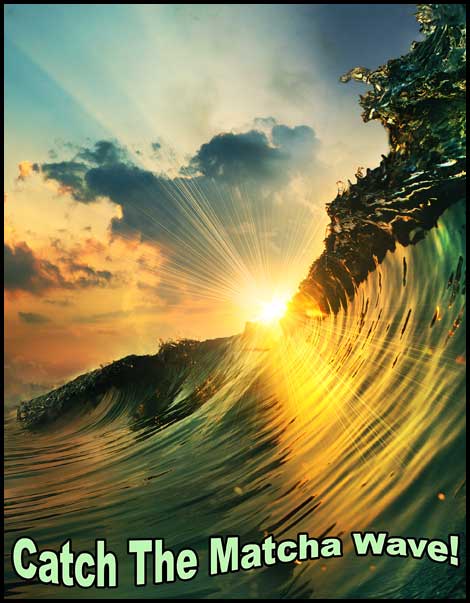 Are You New to Matcha?  Catch the Wave!

Matcha tea is a potent superfood/tea that can have an intense cleansing effect on the body - especially if your body is not used to these types of superfoods. The more toxic build-up you have in your system, the stronger your body may react.

Matcha helps to pull the toxins into the blood stream and then filters them out of the body. The side effects can be similar to someone who is implementing a cleanse for the first time. So, like any new practice, proceed with smaller amounts in the beginning to be safe, adapt to your limits, and build up to your energy demand.

What is Matcha and why should I drink Matcha?

Matcha green tea is known as the "Ceremonial Tea" in Japan and is ritualized in the traditional Japanese tea ceremony that demands premium and pure tea for overall clarity and to enable focus in meditation. Most immediately, the tea is an amazing source of energy. We all operate at different energy levels based on our respective lifestyles and schedules. Matcha has a keen way of not interfering with energy like coffee or other caffeinated beverages. It flows more naturally—adapting to us rather than requiring us to adapt to it.

Although Matcha is a relative to traditional steeped green tea leaves, this is not your common green tea. You can think of Matcha as a whole food, and the premium source is packed with so many vitamins, minerals, nutrients, antioxidants and amino acids that it conspires to sustain your body energetically and nutritionally for hours at a time.

Its root function enables sustained energy and endurance, which helps activate the metabolism. More broadly, Matcha is beneficial for those with high blood pressure, and is a cross-functional superfood—battling disorders such as diabetes, obesity, digestive snags—enabling cleansing and regularity, and absolutely can bring your mood out of the depths of minor depression and anxiety—actually providing a natural euphoria without the side-effects of coffee or energy drinks. The most important difference between Matcha and other traditional daily drinks is that it is pure energy rather than compromised acidic energy that is inherent in the coffees and sugar-laced drinks so common in typical commercial cafe. An acidic state wears down the bodily systems over time and sets the body up for failure rather than the success we all strive for.

Is the caffeine different from that in coffee and black tea?

The caffeine in Matcha is alkalizing rather than the opposite—acidic. There is caffeine in Matcha, but it releases into the bloodstream slowly. The time of the release varies, but it is not nearly as harsh as the caffeine rush inherent in coffee and energy drinks. This gradual and consistent release provides the body with just the right amount of caffeine over a longer period of time rather than dumping a huge amount of caffeine into the body all at once. Matcha still yields an immediate boost, but not the extreme rush. The lift is far more appropriate to your energy demand, and can be easily regulated based on that demand. Once again, a blast of too much caffeine results in an acidic state that can harm the stomach lining and arteries over time, taxing the organs and disrupting the body's overall functionality. By contrast, Matcha's caffeine has an alkalizing effect, resulting in a much gentler influence on the stomach, which gradually aids with digestion, healing, cleansing. Matcha gives to your overall balance rather than taking away.

How does Matcha compare to regular steeped green tea?

Green tea in any form is a source of antioxidants, but matcha is one of the most powerful sources of antioxidants (catechins & polyphenols), minerals (calcium), trace minerals and Vitamins (A, B-Complex, C, E & K). Why are antioxidants important to our health and longevity? Basically, antioxidants are a preventative; protect the denaturing of human cells by eliminating free radicals, which are primarily caused by toxins and pollutants. The average American ingests approximately 300 lbs. of chemicals/pollutants/pesticides per year. We are surrounded by chemicals and preservatives in our foods along with toxic gases and carcinogenic chemicals parading through the atmosphere. Matcha is just one source, but one of the most powerful and easily accessed sources of these critical counters to neutralize daily toxins.

Why does it come in a powder?
Matcha, which means "powdered tea", is made from aged green tea leaves—harvested, steamed and dried. They are later ground into a fine bright green powder, known as Matcha. It is like eating a whole versus a partial food. Unlike other green teas, drinking Matcha is like sucking directly from the leaves and the whole tea plant itself. Therefore, Matcha is much more concentrated in every possible nutrient and more easily absorbed. When common green tea (in a bag) is steeped, only 5-10% of the powerful nutrients are infused into the water. By contrast, Matcha is not steeped, but is a whole plant ground into powder that is blended directly. As such, the powder provides 100% of all the nutrients inherent in the plant.

How should I use Matcha?
It is best to start with ¼-1/2 tsp daily of Matcha and then gradually increase amounts once your body adapts to the tea, up to 1 tsp 3x/day. We strongly urge those who are new to Matcha not to exceed ½ tsp of Matcha at a time for the first few weeks because too much at once can be too intense for the body. Like any beverage that naturally stimulates the body, it is wise not to drink on a totally empty stomach until your body has adjusted. We recommend to drink Matcha with milk or add to a smoothie for the first few weeks as you introduce the tea to your system, and not to drink the powder plain with water. Matcha is so rich in powerful nutrients and gentle cleansing properties that there is a chance that someone who is new to this tea may experience minimal nausea.

Here are various ways to prepare your Matcha drink:

1. Simply stir in a tea cup of hot milk with a spoon or tea whisk.

2. Simply blend the tea with milk and heat over the stove top in a pan.

3. Add to a smoothie or to water in a shaker and blend or shake.

4. Blend the powder in the blender with about 2/3 cold milk and 1/3 water for a few seconds and then boil it over the stove top in a pan.

5. While bringing the milk to a boil in a pan, add the matcha, and then use a whisk and stir constantly while the milk comes to a boil.

What should I expect after drinking it for the first time?
Matcha tea is potent and can have an intense cleansing effect on the body - especially if your body is not used to these types of superfoods. The more toxic build-up you have in your system, the stronger your body may react. Matcha helps to pull the toxins into the blood stream and then filters them out of the body. The side effects can be similar to someone who is implementing a cleanse for the first time. So, like any new practice, proceed with smaller amounts in the beginning to be safe, adapt to your limits, and build up to your energy demand. Enjoy!